I was assigned to write a sort of creative essay from the POV of Christopher (the protagonist who is a 15 year old boy in the novel with an autistic spectrum condition — I’m guessing Aspergers?) for my English class. 👣️

So once again, here’s a nice little essay I have for you. This essay was one of my favorite ones to write because at the time (when I was in 9th grade), I felt I could relate a lot to Christopher from the novel, “The Curious Incident of the Dog in the Night-Time”. I was assigned to write a sort of creative essay from the POV of Christopher (the protagonist who is a 15 year old boy in the novel with an autistic spectrum condition – I’m guessing Asperger’s?) for my English class. While I can’t say I’m an Aspie at all, I’ve been the meticulous, cool, and logical type for a long amount of time now and I have run into a few guys with Asperger’s in my lifetime so while my knowledge of Aspies is fairly limited, I’ve always been fairly interested in the whole notion.

Now technically speaking, I’ve known an Aspie all my life because one of my cousins has Asperger’s but I can’t say I see him too often so I’ll just go ahead and talk about my 8th grade friend.

The first school friend I ever had with Asperger’s was this short little fellow I’ll call Phil, since I don’t want to call him out here. I got to know Phil in 8th grade. He got pretty good grades and we were in most classes together. One of those days, we decided to work together on our vocabulary cards together using this website called Quizlet. I can’t remember if I had been the one to introduce the website to him or vice versa, but ever since 8th grade I’ve been using Quizlet as often as I use hand sanitizer (which is quite often).

Anyway, Phil and I didn’t have the loudest of relationships – he kept to himself and so did I really so we mostly just studied our vocab words next to each other in the middle school’s library. I grew to have a lot of respect for the chap and well, I definitely still remember that brief and rewarding friendship I had with some while ago. It was around that time I truly became interested in learning more about this whole notion of Asperger’s. There was also this nice fellow I came to know about very briefly in high school, but this essay I wrote was mainly inspired by my experiences with Phil and my own personal conceptions.

Father must have had something very important to attend to because I don’t know where he is anymore. I am outside of this very tremendous building called MacArthur Mall. This would be my first time being at least 5 feet next to a mall. A mall is a huge place where many people come all the time and where they purchase items of all sorts and stay there for a long time and eat too. My mom went to malls all the time and usually didn’t come back until 6:00 p.m.. This makes me worried because I don’t like being near people and shopping for items and eating at the same place for a very long time with many people around me and thinking about it makes me want to go sick on the cement.

I have to be at my first English class at Maury High School with Mrs. Bozza in room 414 at exactly 7:25 since I need to finish my last year of high school here, and it will be my first day at this high school. I researched this school online yesterday and it is located on 200 Shirley Avenue Norfolk, VA 23517. This is good because I know where it is but I don’t know where I am and I feel more sick than I was before. I start to groan and I sick on the cement. A man I didn’t know ran up to me and asked if I was okay. I started to scream while going sick on the cement because I learned that if someone you don’t know well comes to you it is considered stranger danger and you should always call for help and find a lady to help you since ladies are nicer. This man was clearly not a lady and he was wearing a yellow 5-pointed star on the left side of his chest on the black suit he was wearing so I screamed again and punched him on the right side of his chest. I don’t like the color yellow at all so I tried to avoid the star as much as I could. The yellow star looked like this: 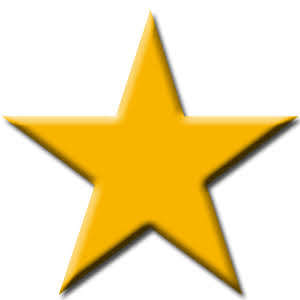 It said Norfolk Police in the middle of it and this made me worry because police are people who catch people that are bad, and he might think I am bad. He backed off, and started running towards this black and white car with the same yellow star on it. He must have been a super bad person because he was wearing yellow and he was a stranger who got too close to me. I decided to run back to the parking lot where father had parked his car. My head hurt a lot now. This is because if I go somewhere new I see everything. When I see everything in a new place for the first time, it is like I have opened 3,000 Internet browsers in my computer at the exact same time and everything is taking so long to load up. I saw the words “Parking Lot”, and while I was searching for my father’s car I saw many different states like New York and Florida on the back end name plates of the cars. I looked around for 10 minutes until I had counted 63 cars, 20 different states on the nameplates, and 113 stickers. One sticker looked like this: 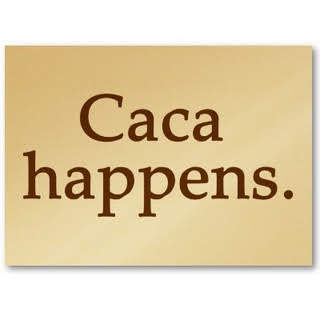 This made me smile because it was a joke. Caca which is poop in Spanish is what comes out of a person’s butt when they are going through defecation which is when people eliminate all the wastes in their body through the anus. This is a joke because poop has to happen otherwise all the disgusting stuff would stay in our bodies forever, and we would die much earlier. This sticker just used the word “caca” to make it amusing since many people don’t know its meaning.

I went back into the mall and looked for someone to help me. I need to get to my class and I have to be brave now, otherwise I will never arrive on time on the first day of school. Furthermore, the first day is always supposed to be the most important. I assured myself that I would not get close to anyone while in the mall by finding out where a help booth was because if people touched me then I would get their germs all over my body and I might get even more sick than I was before, and a stranger might run up to me again. Then the whole process will start over again, and I need to get to class.

It was 6:45 a.m. so there weren’t many people in the mall and I found a help booth easily by running for 5 minutes so it was 6:50 when I arrived. There was a short black lady there with glasses so she was probably nice since she was a lady. “Where is Maury High School located?” I asked her. She laughed, so I decided she wasn’t very nice because I don’t like it when people laugh at me. “Is it your first day or something kid?”. This was an irrelevant question so I asked again, “Where is Maury High School located?”. “Look here kid I have no idea, but there are some maps over there that can probably help you out on wherever the heck you’re going.”, then she pointed at a small shelf right next to the booth that had many brochures on it. I went over to it and saw so many titles on the brochures like “MacArthur New Regulations”, “Petit Four”, “New Christmas Photo Shoots Available with Santa at MacArthur” and I thought this was silly because there is no such thing as “Santa”. The “Santa” they are taking about is probably an old man who just wants to get paid to pose as this fictitious person and just has to dress up in this big red suit and be fairly overweight. I picked up the one that said “Getting Your Way Around Norfolk’s Attractions” on the top in bold letters. It showed a map of MacArthur mall and all the streets near it. I looked for Shirley Avenue and I found it and exited out of the mall quickly because it was already 7:00 a.m.

I started running because I knew it could take someone like me a while to run a mile because this is how far I had to travel. According to the map, I had to head up Monticello Avenue and then turn left at Freemason Street, make a right at Boush Street, enter Llewellyn Avenue, and then turn left at Shirley Avenue, and Maury High should be at the right. By using the distance formula which is Distance= Rate x Time, I figured out it would take 23 minutes to get there if I walked the whole time. I started to run really really fast because it was already 7:05 a.m. and I needed to be in English Class at 7:25 a.m. This was not good because I was carrying my backpack and this would decrease my rate of speed by at least 21%. I was really tired when I got to Shirley Avenue, because when I put my hand on top of my heart to check my heart rate and it was 30 which wasn’t very good either since someone 15 years 3 months and 20 days old should not exceed 34 heart beats per 10 seconds and thats how long I tested it. I ignored this though because it was already 7:19 since it took me 14 minutes to get here and I don’t like being late for anything.

I ran inside the school and since my class was in room 427 and there was 4 floors in total based on the outside of the building, I raced up all the stairs. It was 7:22 so I only had 3 more minutes. There were barely any people in the staircase and this was good. Once I got to the 4th level I looked at all the doors I saw and on the fifth door I saw the number 414 and I raced inside the classroom and took a seat in the first row. There were about 15 other people in the class with me and when I looked at the lady who must have been Mrs. Bozza and she smiled at me but I looked away because I didn’t know her so well but she was a lady and a teacher so she was probably very, very nice. I looked at my watch and it was exactly 7:25 a.m.