My review of the Binding of Isaac desktop game. 💀

This is going to be a quick game review on The Binding of Isaac.

In all honesty, between work and school, I’ve had very little time to play games let alone try to review my experience with them.

However, I just had to make an exception since this review has been on my mind for such a long time.

If you’re not already familiar with The Binding of Isaac, you essentially control this little bald child called Isaac who is being chased down by his psychotic overly religious mother.

Being an atheist, this background story resonated a lot with me from the get-go. You see, when you start the game, they give you a small glimpse of Isaac‘s life before it went haywire.

Isaac was living with his mother, who enjoyed watching religious TV shows all day long. He was fine with it since he was mostly left to play with his toys in his room all day.

However, one day – and I’m assuming this was a result of too much religious TV, his mother hears the voice of God and this voice in her head starts telling her to minimize the amount of sins her son Isaac has in his life.

What that meant for Isaac was no more possessions of any kind so no more toys or even clothes (which is just gross).

Now at this point, Isaac is very sad because he doesn’t have a lot going for him besides having to succumb to his mother’s crazy psychotic wishes that some voice in her head told her were necessary.

Isaac at this point is already in a pretty desolate state physically and mentally but then his mom gets one last message from God. God tells her that in order to show her true love for him, she must make the ultimate sacrifice. Given that the protagonist’s name has biblical references, most people can assume what this means for him.

His own mother tries to murder him.

And of course, at this point, it’s up to you to decide whether she succeeds or fails. When he is stuck in his room, all naked and pitiful, Isaac looks through the knob door and sees his own mother with a butcher knife in her hand. In a state of panic, he attempts to flee by going through the trap door in his room (how bloody convenient) that leads to the basement (which is btw, HUMONGOUS). 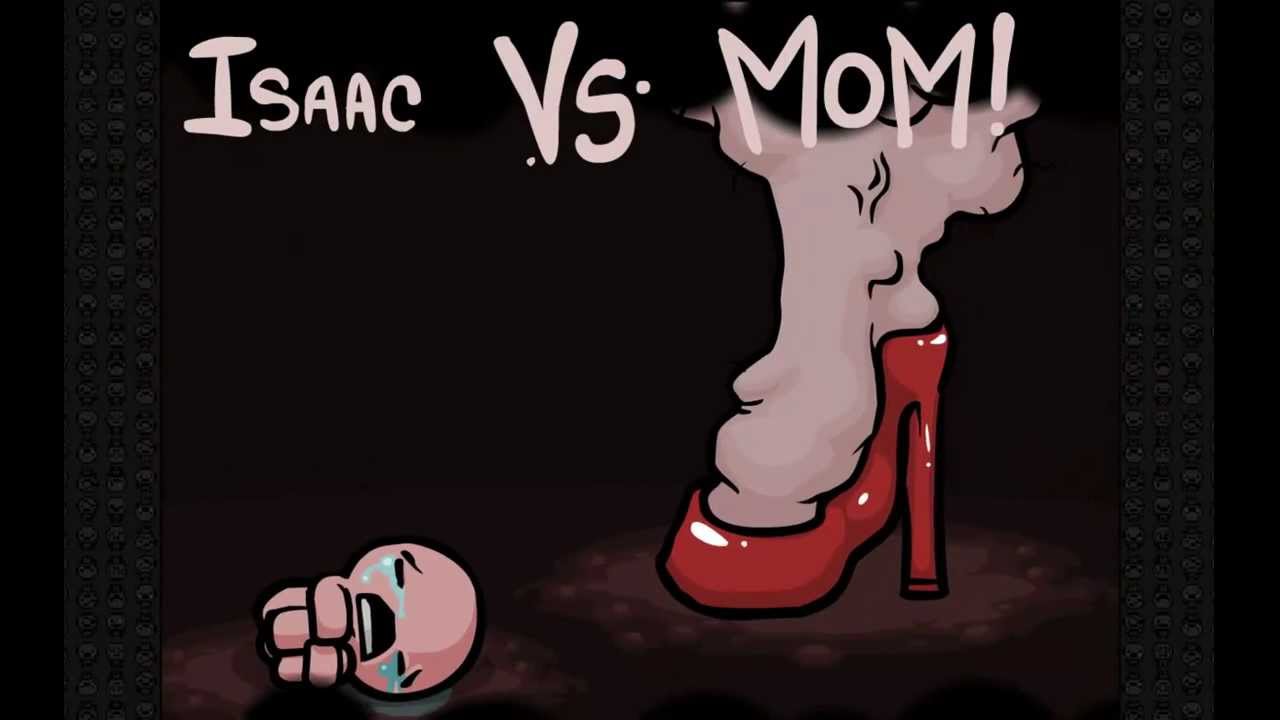 The final boss in the basement is Isaac’s mother, btw.

HOWEVER, it turns out the plot thickens. 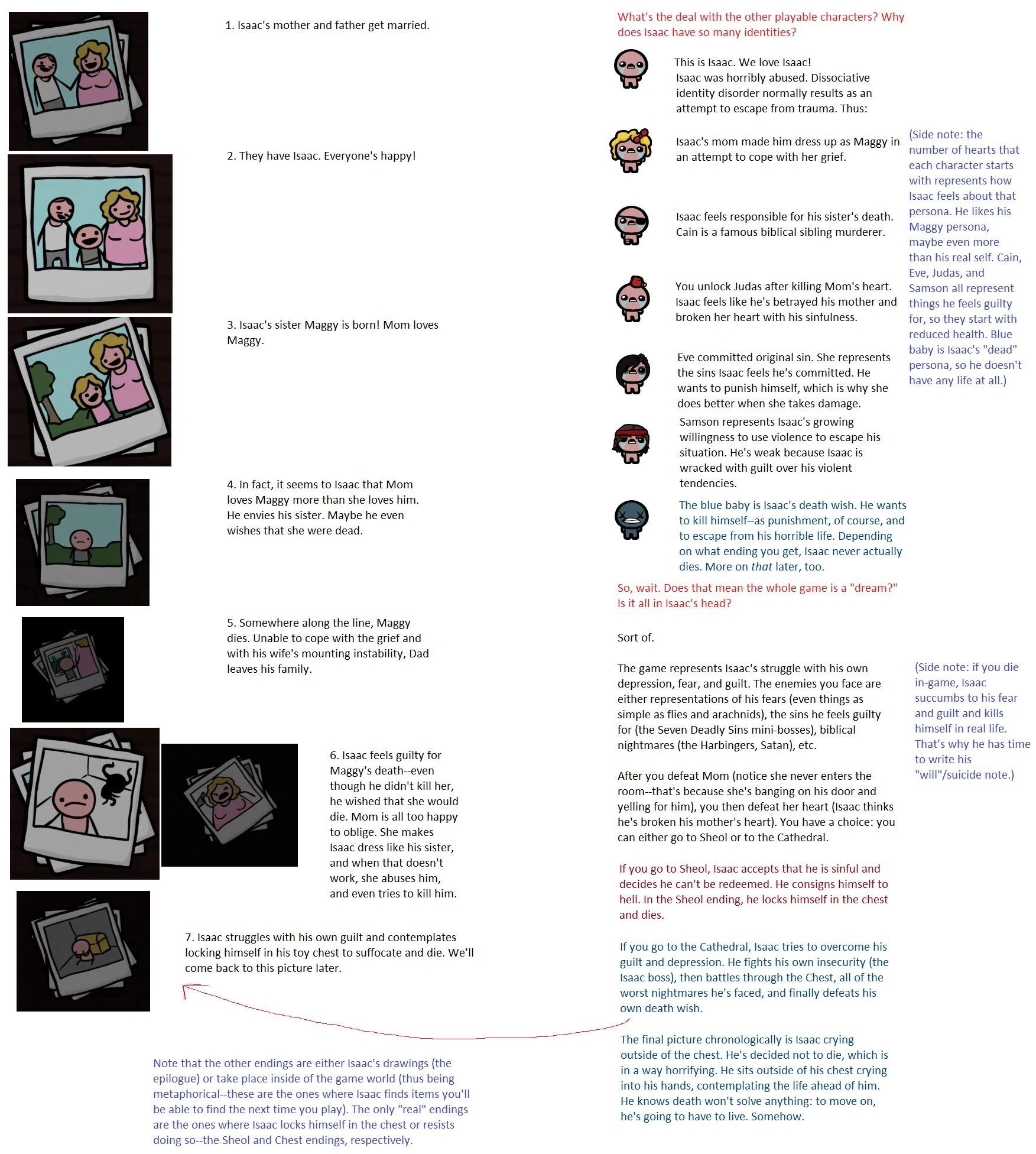 This is, of course, where all the real fun begins.

By having such a very morbid ambiance all throughout the game, The Binding of Isaac successfully communicates what a terrible situation Isaac is really in.

Here he is, battling all these fascinating and creepy looking monsters, each with their own quirk while trying to make sure to avoid the most twisted monster of all – his own mother. The message of how low one can sink when in isolation and in rejection is very obvious.

I tend to wear my heart on my sleeve (unfortunately), so I couldn’t help but feel a terrible pity towards Isaac. It’s probably one of the primary reasons I kept wanting to engage in the game constantly.

I still distinctly remember one instance where I actually shed some tears for the character when he picked up a special item and it turned out it was Max’s Head, which was a severed dog’s head. I assumed it was Isaac‘s own dog and the game lets you know that he is instantly traumatized and gains a very wide-eyed stare.

At this point, I become deeply saddened because I put myself directly in the shoes of Isaac. If I had the severed head of my dog, I would have been entirely heartbroken and yes, severely traumatized.

It’s no wonder that the item multiplies the damage stats of Isaac by so much.

What doesn’t kill you makes you stronger, I suppose.

One of the unique qualities of the game is the randomly generated environments. It’s also not possible to save a game in a directory or anything. Because of this, if you wanted to really advance to the deepest and darkest levels, you’ll have to really play a while and hope you don’t get killed.

Because once Isaac dies, there is no saved point of entry. It’s back the very beginning or in this case, the first level of the basement. A lot of other players feel this is one of the more annoying qualities of the game but I can’t help but feel it’s what makes the game all the more entertaining since you have to either set yourself to play a while or not. It makes casual gaming a lot easier as well, which I can appreciate since I try to keep myself busy.

Another feature of the game I found entertaining (instead of just convenient) was the diversity of all the monsters. At the end, they would join hands to fight against you which only made it more appropriate in my eyes.

A more interesting aspect of the monsters at the mini-boss level is how they represent the seven deadly sins:

I feel like these monsters, in particular, were designed so carefully so as to accurately represent the given sin. It’s quite amazing.

Another aspect of the monsters especially that I found fascinating were the four Horsemen of the Apocalypse. They only are able to pop up once you’ve completed the game all the way through once (i.e. Isaac successfully killed Mom).

Once I realized that every horseman can drop a cube of meat, I looked forward to battling them every time I entered a boss room at the end of each floor.

You see, a cube of meat means being able to create your own friend, Meat Boy.

There are four cubes required for a fully formed Meat Boy which are only dropped by the headless horsemen (naturally, right?). And you really do want to have Meat Boy as your friend because Meat Boy is strong and helpful. He’ll damage your enemies on touch and act as your personal bodyguard of sorts. It’s awesome!

In terms of characters, unlocking all of them takes a while (I actually never got to this point myself). With each new character, you either receive a lot better stats than you would with normal Isaac or just more items to start the game out with (i.e. with blondie, you would start out with a lot more hearts or life). 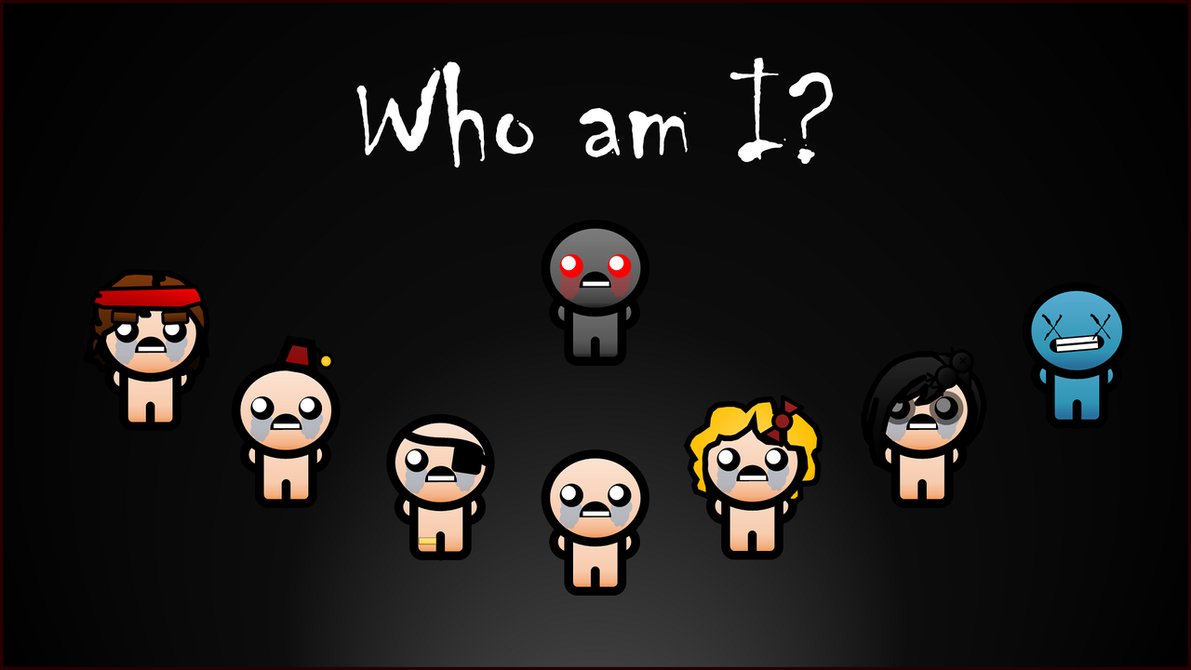 Having your own crew.

This sounds strange at first, but the game isn’t all blood and gore. It’s a friendly kind of macabre. Isaac can gain his own friends. The first time one of the little creatures joined my crew, I was quite joyous. Suddenly, Issac wasn’t in this alone. He had help from his crew. He was the leader of something. He was forming a revolution. 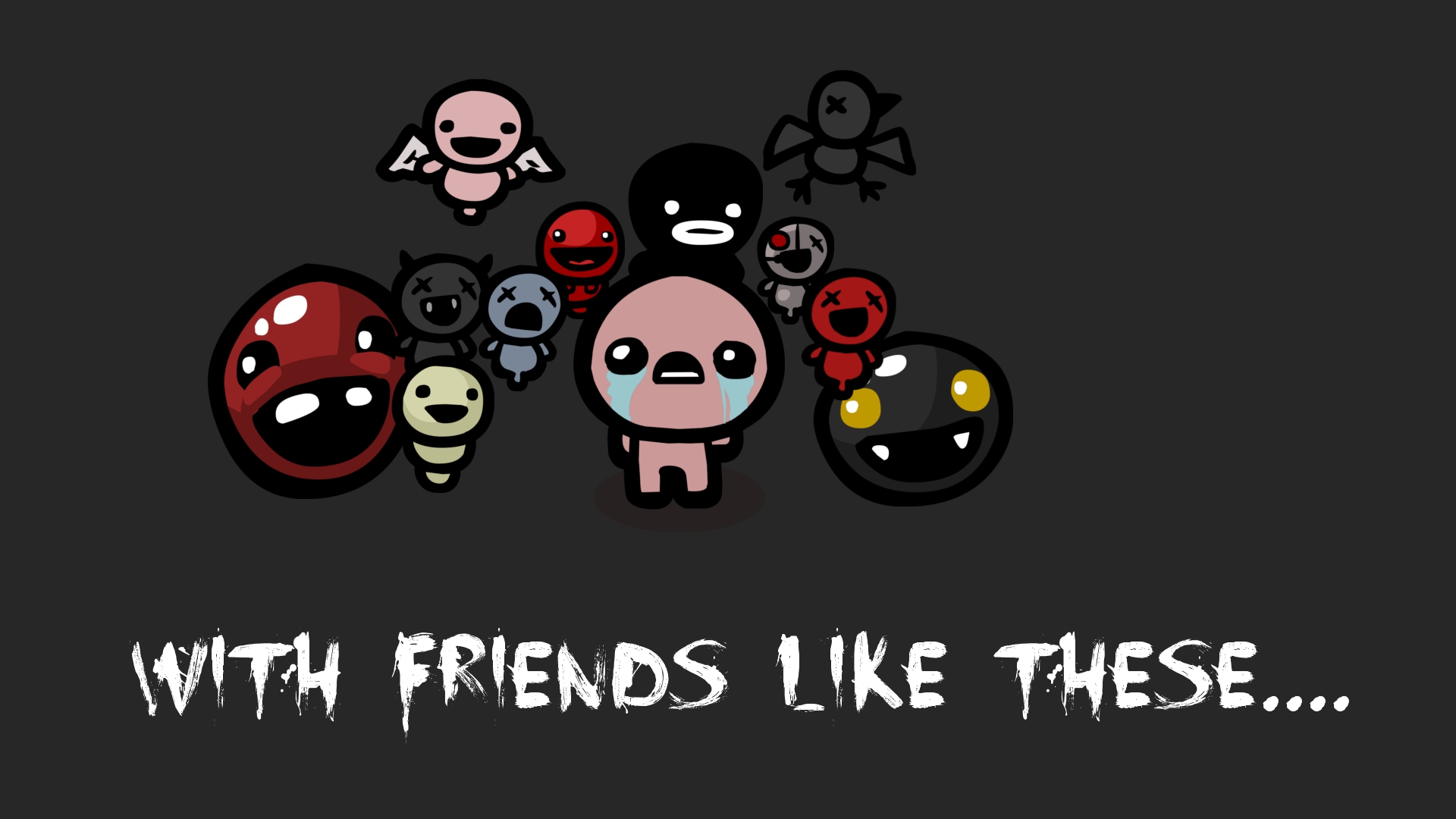 Or in other words, if you’ve ever watched Minions, it’s basically like when one of the characters shouts out

Binding of Isaac – Many Hearts Again

Binding of Isaac – All Hearts

Binding of Isaac – The Womb 1

Binding of Isaac – The Womb 2

Binding of Isaac – An Ending

Binding of Isaac – Waste of Hearts

Binding of Isaac – Many Hearts

Even if you’re not into the horror genre of games, I’d give Isaac a shot because he’s in desperate times and he deserves all the help he can get.